Abortion has always been a controversial topic in the United States. The debate of whether it is ethical or not has been ongoing, but it has continued to stay legal due to the ruling of the Supreme Court in Roe v Wade. This decision made it illegal to ban abortion.

However, with the death of Supreme Court Justice Ruth Bader Ginsberg, a huge advocate and supporter of Roe v Wade, and the induction of Amy Coney Barrett, a huge advocate for the overturning of Roe v Wade into the supreme court, has given states more leeway to institute abortion restrictions that hover the line of abortion bans.

As this becomes more common, the importance of research into the effects on these regulations on women is more important than ever.

Abortion is one of the most common medical procedures performed on women. It has been found that “One in three women in the United States will seek an abortion before she is aged 45 years”(Yanow 2018).

In a year, there are over a million abortions preformed in the United States.  Only 0.3% of medcal abortions result in a complcation that requires hospitalization (Yanow 2013). All of this would lead one to believe that they are easily accessible, but they are in fact not.

Many states have passed laws that make it harder and harder to access a sometimes life saving procedure. Between 1973 and 2015 states in America enacted 1,074 regulations on abortion (Sofer 2018) despite the fact that abortion is one of the safest modern medical procedures. Meaning, today’s women are facing unprecedented diffculty when it comes to finding access to both a safe and legal abortion.

This bill prohibited abortions past 20 weeks as well as put heavy regulations on clinics who offered abortions. HB2 caused the closure of one third of Texas’ abortion clinics (Fauntes et. al 2016) which means access to abortion went down significantly.

Another example of a Texas law that contributes to decreased access to abortion is Senate Bill 8, which went into effect September 1, 2021. This bill banned any abortion after six weeks. Many states have introduced very similar bills which all affect women’s health in drastically negative ways. 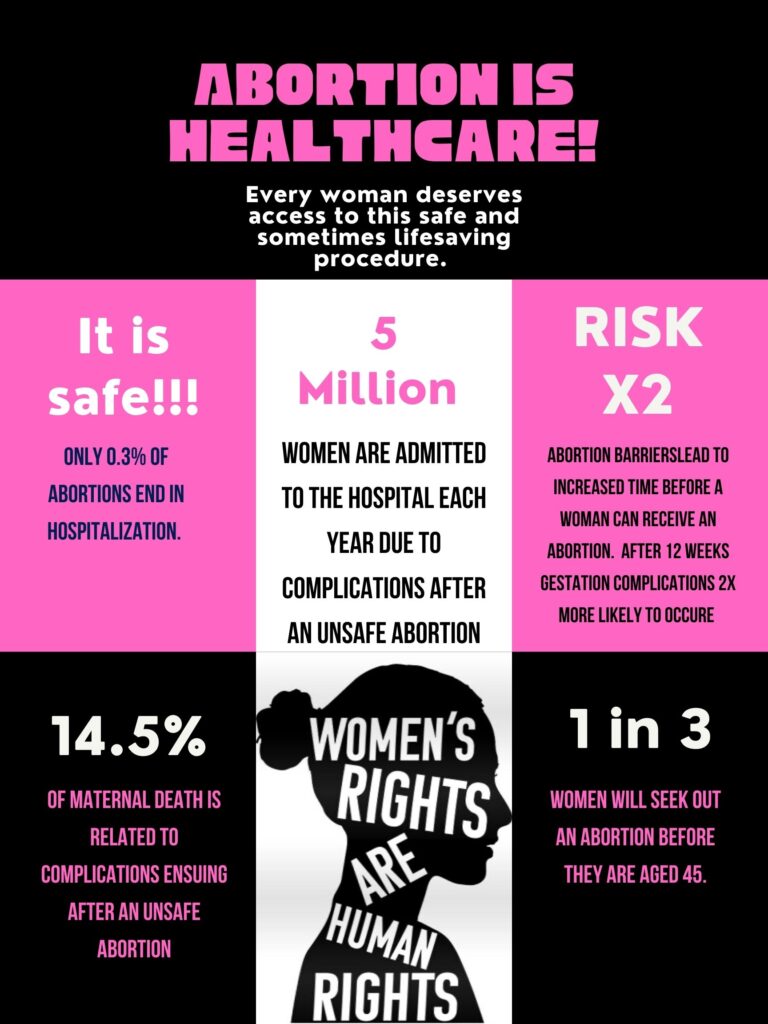 Decreased access to abortion has been proven to have a negative impact on women’s mental and physical health. The mental impact comes mostly from the confusion. Many abortion regulations force clinics to shut down. This means many women who had an appointment scheduled with a clinic that got shut down no longer had access to an abortion (Raifman et. al 2021). With so few clinics available, women are left in a state of worry and panic trying to find another clinic that will offer them the service.

The panic continues to ensue once they find a new clinic because many times there is an added travel time needed. This means time off from work is necessary as well as funds for travel. Many women find themselves travelling at least 50 more miles than planned and spending a minimum of 100 dollars more than originally quoted when having to switch clinics (Gold et. al 2016). As a result, the law has not only taken a mental toll on women but a financial toll as well.

Even worse than the mental toll is the physical toll decreased access takes on women. Many regulations not only decrease the number of clinics but introduce waiting periods for women before they can receive the procedure.

This means the time in which it takes them to ultimately get an abortion increases. The later an abortion takes place, the higher the complication rate becomes. It is shown that complication rates doubled in abortions done after 12 weeks which is what many women are forced to do when new restriction go into effect (Rolnick et. al 2012).

That is only the statistic for women who are still able to obtain a safe abortion. Many restrictions limit the time after gestation that a woman can get an abortion meaning once that limit passes she no longer can recieve an abortion legally. Women who are past this deadline or can’t afford the costs associated with these laws must carry their pregnancies to term.

It has been found that pregnancy has a mortality rate fourteen times higher than that of abortions. Further, women who carry the baby are 24 more times likely than those who have an abortion to end up with a hypertensive disorder (Darney et. al 2020).

While these are complications that every pregnant woman encounters, the difference lies in the fact that those who face these after not having access to an abortion did not consent to the risks.  If a woman chooses to get pregnant and carry the pregnancy to term, she is accepting the risks that are associated with this choice.  However, women who do not want to carry the pregancy to term, but do not have the option of abortion have their choice stripped away from them.  It is unfair for them to go through these terrible statistics for something they do not want and could avoid.

Other women who do not want to be another statistic resort to unsafe ways of receiving an abortion. Yearly, 5 million women are admitted to the hospital due to complications with unsafe abortions (Faundes et. al 2015).

Many women report trying an “at home” abortion solution due to limitted access and increased time and money required for abrotion after restrictions are put in place (Gold et. al 2016). Meaning, 5 million women could be saved from these complications if they had access.

In addition, 14.5% of maternal deaths are related to complications that ensue due to unsafe abortions (Faundes et. al 2016). Overall, the physical toll that state regulations have on women is completely negative and frankly quite terrifying.  States are putting women’s health at risk when they sign bills such as those in Texas.

Study after study shows that abortion is necessary healthcare. It is one of the most widely utilized medical procedures and among one of the safest if administered safely and legally.

Studies have proven that when declined access to abortion women’s mental and physical health suffers as well as their constitutional rights are taken away, yet states continue to put laws in place that restrict access to abortion.

These laws close clinics and increase the time women must wait before receiving an abortion. In some states, the laws are so restrictive they almost cross the line of being a ban on abortion.

Politicians try to cover it up by claiming this is to “save the morality of America”, but in turn it puts so many in danger. These states claim to be making America a safer place for all, but the literature proves that this is not in fact true.

Laws that restrict abortions create a space that directly hurts the health of over half of America. In order to truly create a safer America, states must band together to increase access to abortions. Until that happens, it would be untruthful to claim to be an advocate for the health and safety of American citizens.

1 thought on “America: a government by the people for 50% of its people.”